IN THE HOUSE: June 7,1970-Crosby,Stills,Nash and Young @ FILLMORE EAST Earlier that spring Bill Graham announced a list of shows for the remainder of the season and stated that a new sound system would be installed over the summer.  One of the announced shows was to be a six night engagement featuring Crosby, Stills, Nash and Young, no opening act and only one show per night at 8:30PM. These would sell out in an unprecedented time. My SASE returned without tickets, a true first for me.

At my girlfriend’s senior prom it was decided at our table that the group of us, four guys and their dates, would attempt to purchase tickets for the next evening’s performance of CSNY. One attempt in the street only found us talking to a speed dealer who did not have any tickets and we didn’t need any speed, so the conversation didn’t last long.  Our lady friends took it upon themselves to wait on line for “stand by” tickets. The show was scheduled for 8:30PM, and the box office usually released the “stand by” tickets about an hour before show time.  However, tonight was different as the girl in the ticket booth, after listening to our girl’s tale of woe took pity on them giving each girl two tickets, totaling eight tickets, all seated together in the fourth row center.

The CSNY show was recorded each night and the best performances from the week were compiled and released as FOUR WAY STREET. The show started with solo sets from each performer doing a few of the “classic” tunes they were known for. KING MIDAS IN REVERSE, a  HOLLIES song was done by Nash. Stephen Stills did solo piano work on 49 BYE BYES, Crosby scored with TRIAD. But for me the highlight was acoustic Neil Young. Geez, what a great start to a show. And the band didn’t even do their collective electric set yet. It only got better. 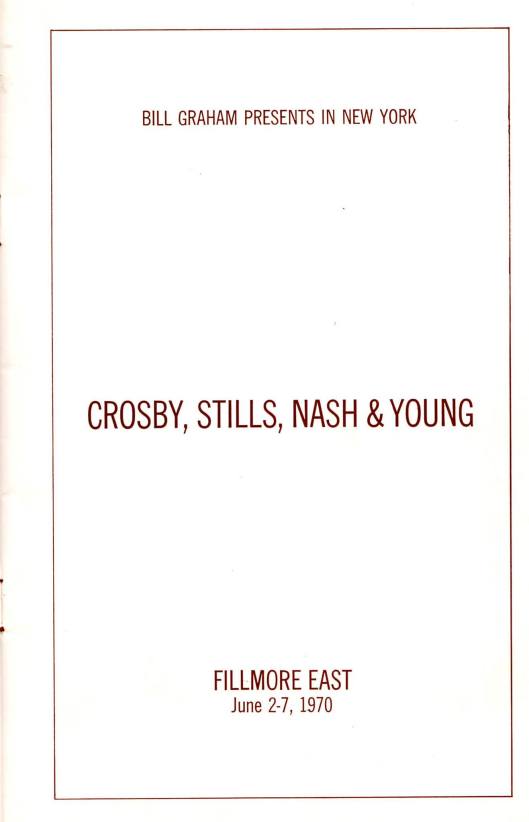