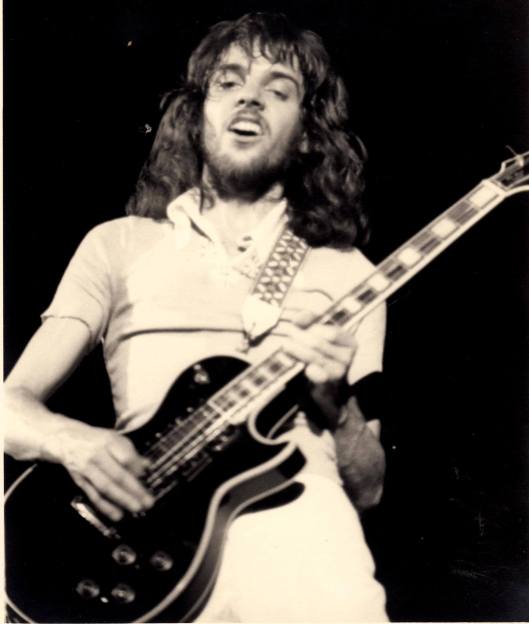 Over the years, I saw PETER FRAMPTON perform 12 times. With HUMBLE PIE at FILLMORE EAST and MADISON SQUARE GARDEN( 5 times),once with FRAMPTON’S CAMEL (above photo taken that night) ,once as guitarist for DAVID BOWIE’S “Glass Spiders” Tour,once jamming with the ALLMAN BROTHERS BAND at The Beacon, and four solo gigs before the FRAMPTON COMES ALIVE era. Frampton was an anomaly for me. While I like rocking guitars and bashingly loud drums, this guy’s licks (and band) were a completely different thing. With THE PIE he ,as the title of the live album suggests, was ROCKIN’ THE FILLMORE. His runs were amazing. Later on, as a solo artist the amps were turned down quite a bit as the music was meant to be heard and maybe not felt. With solo Peter,  I awaited for the assault ala PIE to begin but alas it never came. The WOLLMAN gig was the last time (except the Bowie thing) I saw PETER FRAMPTON perform as PETER FRAMPTON. Funny, as this date was during the tour where he recorded the notorious FRAMPTON COMES ALIVE. He was touring to support his A&M Records release simply titled FRAMPTON. During this gig he did his “Baby, I Love Your Way” and “Show Me The Way” which featured a new device called a “talk box”. As a matter of fact this set was almost identical to the LIVE album which came out a few months later, soaring to #1 on the Billboard charts. And it was at this time that the masses “discovered” PETER FRAMPTON making getting tickets or seeing him in a small venue, like the Rink, ever again impossible. But, I enjoyed my run with FRAMPTON.

PS: If you listen carefully you can hear me clapping on Humble Pie’s ROCKIN THE FILLMORE. And PIE was the “extra added attraction” that night to LEE MICHAELS. After they tore the house down poor Lee didn’t have a chance on his piano.